The swingingest swinger on the Supreme Court, 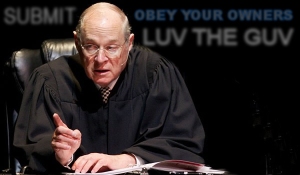 Since the retirement of Sandra Day O’Connor, Swingin’ Anthony Kennedy has been the swingingest swinger on the Supreme Court, the big Numero Cinco on all those 5–4 white-knuckle nail-biting final scores. So naturally Court observers have been paying close attention to his interventions in the Obamacare oral arguments. So far he doesn’t sound terribly persuaded by the administration’s line:

“The government is saying that the federal government has a duty to tell the individual citizen that it must act, and that is different from what we have in previous cases, and that changes the relationship of the federal government to the individual in a very fundamental way.” As John Hinderaker wrote at the Powerline blog, “In that last observation, Kennedy seems to be channeling Mark Steyn.” Which is true. As I wrote in National Review only two or three issues back, “I’ve argued for years in these pages that governmentalized health care fundamentally transforms the relationship between citizen and state in ways that” — and here’s the bit Justice Kennedy isn’t quite on board with yet — “make it all but impossible to have genuinely conservative government ever again.” So I’m naturally heartened to hear him meeting me halfway. This was one of the highlights of a week that a shell-shocked Jeffrey Toobin, crawling out from under the rubble of the solicitor general’s presentation, told CNN viewers was “a train wreck” for the government’s case.

And yet, and yet . . .  If you incline to the view that Obamacare is a transformative act, isn’t there something slightly pitiful about the fact that the liberties of over 300 million people hinge on the somewhat whimsical leanings of just one man? I mean, Kennedy seems a cheery enough cove, but who died and made him the all-powerful Sultan of Swing? “It is a decision of the Supreme Court,” explained Nancy Pelosi a few years back in more congenial times for the Democrats. “So this is almost as if God has spoken.”

That’s not how earlier Americans saw it: “If the policy of the government upon vital questions affecting the whole people is to be irrevocably fixed by decisions of the Supreme Court,” wrote Abraham Lincoln, “the people will have ceased to be their own rulers.”

Which they have. Or it would not have come to this.

In February, George Jonas wrote up north that Canadians enjoyed more rights and freedoms in the days before all their rights and freedoms got written down in a big ol’ “Charter of Rights and Freedoms” (1982). At this point, many readers will object that the constitutional documents of some effete pansy ninny monarchy like Canada are entirely irrelevant to a strapping butch manly self-reliant republic like America. Three words: Ruth Bader Ginsburg. Finding herself with a bit of time on her hands, Justice Ginsburg swung by Cairo last month to help out the lads from the Muslim Brotherhood building the new Egypt: “I would not look to the United States Constitution if I were drafting a constitution in the year 2012,” she advised them. Instead, she recommended the Canadian Charter of Rights and Freedoms and the European Convention on Human Rights. That’s why the fate of the republic will come down to a 5–4 vote. Because four-ninths of the constitutional court think the American constitutional order is as déclassé as a 2006 BlackBerry.

“There seems to be an inverse relationship between written instruments of freedom, such as a Charter, and freedom itself,” mused George Jonas. “It’s as if freedom were too fragile to be put into words: If you write down your rights and freedoms, you lose them.” That was generally the view of the Britannic part of the English-speaking world until the late 20th century: What’s unwritten is as important as, if not more so than, what is. The constitution of Australia, for example, makes no mention of the office of prime minister. The job exists only through custom and convention understood from the United Kingdom, where likewise it existed only through custom and convention: “statutory recognition” in London didn’t come till 1937 — or over two centuries after dozens of blokes had been doing the job.

By contrast, on the Continent, where many constitutions date all the way back to the disco era (Greece, 1975; Portugal, 1976; Spain, 1978), if the establishment wants to invent a new “right” — i.e., yet another intrusion by government — it goes ahead and does so. If it happens to conflict with this year’s constitution, they rewrite it. The United States is the only Western nation in which our rulers invoke the Constitution for the purpose of overriding it — or, at any rate, torturing its language beyond repair. Thus, in this week’s debate on whether Obamacare is merely the latest harmless evolution of the interstate-commerce clause, the most learned and highly remunerated jurists in the land chewed over the matter of whether a person, simply by virtue of being born, was participating in a “market.” Had George III shown up at the Constitutional Convention to advance that argument with a straight face, the framers would have tossed aside the quill feathers and reached for their muskets.