Bush and Obama Together At Last! 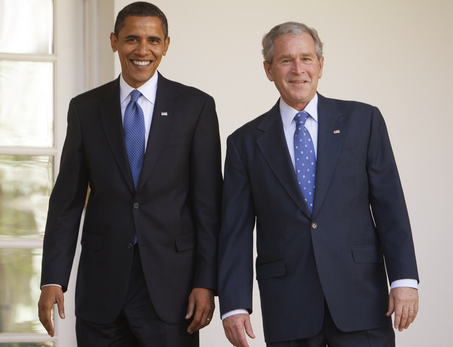 Bush and Obama Together At Last: In Misunderstanding the Middle East

In one of his first statements since leaving office, former President George W. Bush remarked on Middle East developments in an article, “The Arab Spring and American Ideals,” in the Wall Street Journal, May 18. The former president reflects certain American misconceptions about the Middle East that are starting to blow up big-time in the region.

“We do not get to choose if a freedom revolution should begin or end in the Middle East or elsewhere. We only get to choose what side we are on.”

—In the Gaza Strip, by supporting the inclusion of Hamas in elections for which it was not qualified to run (since it had not accepted the Oslo accords), Bush’s own administration ensured that there would be a radical Islamist revolution in the Gaza Strip. This weakened the already dim prospects for any Israel-Palestinian peace process, has already brought one war, and will certainly bring others.

–In Lebanon, by refusing to give strong support to the moderate forces, the last two presidents ensured that the “freedom revolution” in that country would end in an Iran-Syria-Hizballah takeover.

–In Egypt, by taking the side not only of a total overthrow of the regime and even openly and unilaterally supporting the possibility of a Muslim Brotherhood government, the Obama Administration did help ensure that the fundamental transformation of Egypt began with the inevitable end of an anti-freedom Islamist regime.

–In Iran, by ignoring the upsurge of protest following the stolen election, the Obama Administration ensured that a “freedom revolution” didn’t get started there.

–In Syria, by refusing to help the rebels in any real way, the U.S. government ensured that the “freedom revolution” would be defeated. Equally bad, by giving disproportionate help to the Islamists, the administration made it far more likely that if the rebellion succeeded it wouldn’t be a “freedom revolution.”

–And finally, in Libya, the United States and its European allies determined pretty much everything, overthrowing Muammar Qadhafi and determining who would rule the country.

Thus, a simple claim by Bush, which is also about the closest he and his successor would agree on any issue, can easily be proved false. One hallmark of those favoring “neoconservative” positions is their lack of knowledge about the actual Middle East.

But that’s not all. The most important point of all is this one: “We only get to choose what side we are on.” The underlying assumption here is that there are two sides: evil dictatorship and noble democracy advocates.

In fact, there are three sides:

–Dictatorships of various levels of repressiveness, some of which are friendly and some that are sworn enemies of the United States.

–Moderate democracy advocates who want freedom in the Western sense of the word.

–Revolutionary Islamists who want a new, and anti-American, dictatorship run by themselves.

During the Cold War, American policymakers were very much aware of this three-part distinction (the third being Communists, in that case). They didn’t always choose correctly but they tried to evaluate each situation seriously. Sometimes they chose the dictators; sometimes they chose the democrats; and sometimes they even helped nudge the dictators (usually military juntas and especially in Latin America) into returning to the barracks and letting democracy resume.

No such careful process goes on now. In fact, the Obama Administration has repeatedly done the opposite of what a proper policy would be.

Bush also reflects Obama in using the be-on-the-right-side-of-history argument, a fatal flaw in a president of the United States who should be making choices based on U.S. interests.

Here is Bush’s argument annotated by me:

“The idea that Arab peoples are somehow content with oppression has been discredited forever.”

Again, the question, sadly, is not necessarily dispensing with oppression altogether but which kind of oppression we’re talking about. They are either willing, or can be forced, into getting rid of the old Arab nationalist oppression and then substituting Islamist oppression for it. Bush argues as if they are going to jump out of the frying pan with no danger of ending up in the fire.

He speaks critically about policymakers who “argue [that America] should be content with supporting the flawed leaders they know in the name of stability.”

Yet such a realist, U.S. interests-based policy has worked for decades. True, there are times when a revolutionary situation exists but these are relatively few and far between. For example, Egyptian dictatorships ruled from 1952 to 2010 without facing a single serious internal revolutionary threat. So how America handles those brief crisis periods help determine what happens for decades into the future.

By the way, Bush speaks of “supporting the flawed leaders,” so does that imply the alternative leaders aren’t flawed, perhaps even more flawed? Perhaps the “flawed leaders they know” do not number among their flaws a tendency to sponsor terrorism, commit aggression against their neighbors, and do everything they can to hurt the United States.

The czar, the Weimar republic, the Batista dictatorship in Cuba, the regime of Prince Sihanouk in Cambodia, and the shah, for example, were all deeply flawed. Now what about the regimes that replaced them?

It would be better to make a distinction in setting policy: overthrow anti-American dictatorships (Iran, Syria, Gaza Strip) and support indispensable pro-American ones that are less oppressive than their counterparts (formerly Egypt, formerly Lebanon, and still Jordan and Saudi Arabia). Remember that a high percentage of those in the Middle East who don’t like U.S. policy also hate the United States (and are not assuaged by America helping them gain power) and want Islamist dictatorship, or at least will vote for it for various reasons.

“But in the long run, this foreign policy approach is not realistic….”

Why? Suddenly revolution is inevitable in every Arab country and nothing is going to stop it? Ridiculous.

READ THE REST AT RUBIN REPORTS

1 Response to Bush and Obama Together At Last!