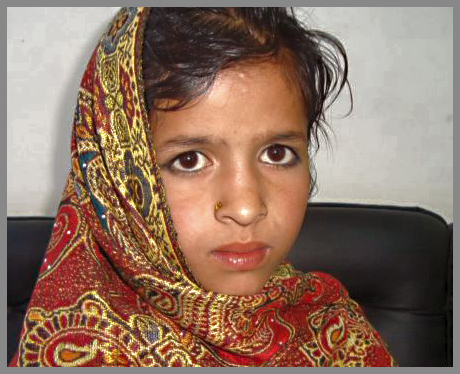 Pakistan receives approximately $18 billion in cash and Billions more in debt cancellations from the US. Britain, France and the Arab League dole out even more billions to the child abusing, terror-supporting nation.

The parents of a 6-year-old girl in Pakistan’s Swat Valley say tribal authorities are forcing them to marry off their daughter to resolve a family feud.

A jirga tribal assembly in the village of Ashari ruled that the girl, Bibi Roza, should be married to a member of a rival family in order to resolve a dispute between the two clans.

The parents have appealed to a Swat court to have the ruling overturned, and local police now say they will attempt to block the wedding, which is scheduled for November 11.

Swara, the practice of exchanging women and girls to settle personal feuds, is common in Swat and other parts of Pakistan’s Khyber Pakhtunkhwa Province.

But exchanges involving girls as young as 6 are considered rare.

The mastermind of the Mumbai massacre travels the country, appears at large ISI sponsored rallies and regularly appears on talk shows demanding jihad against India and America. There is every danger that another major attack is coming, ironically made more likely if détente deepens, since the dark forces in Pakistan are determined to halt it.

US AND ITS DILEMMAS

The US’s relationship with Pakistan is even more tortured and complex. On the one hand, Washington has been very generous to Pakistan this century. Since 9/11, the U.S. has disbursed over $25 billion in military and economic aid to Islamabad.