“Behind closed doors, President Obama had given his counter-terrorism adviser, John Brennan, carte blanche to run operations in North Africa and the Middle East, provided he didn’t do anything that ended up becoming an exposé in The New York Times and embarrassing the administration. In 2012, a secret war across North Africa was well underway.”

Former Navy SEAL Brandon Webb, and Jack Murphy, a former Green Beret have released a new book that finally makes sense of the attack on the US Consulate (CIA Annex) in Benghazi Libya.

Webb and Murphy have used their extensive contacts in the SOF and Intel communities to unearth previously concealed facts that implicate the highest members of the Obama administration in a massive cover-up of secret US military operations that led to the deaths of four Americans, including Ambassador Chris Stevens. Journalistic speculation and the ever-changing narratives proffered by members of the Obama administration have been derided by The Flying Camel and others since the events of 9-11-2011.  This is the first account that makes sense.

Benghazi: The Definitive Report is now available at Amazon as an E-Book. 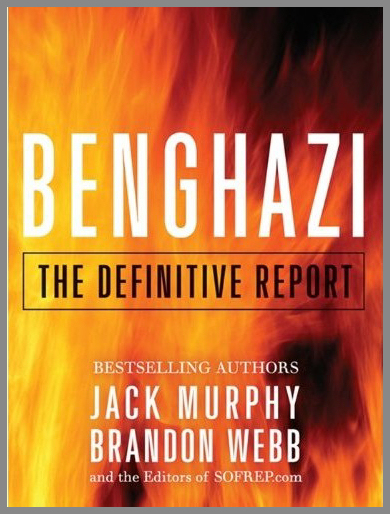 This Tuesday, White House Counter-Terrorism adviser John Brennan will sit down for the closed door classified portion of his confirmation hearing.  Brennan brings a lot of baggage to the table and has taken some fire from both the Left and the Right for his support of para-military activities and so-called Enhanced Interrogation Techniques.  This last week we’ve seen puff piece after puff piece as our 4th Estate absolutely gushes over John Brennan to pump him up for the confirmation hearings that will determine whether or not he will be the next Director of the Central Intelligence Agency, filling the void left by General Petraeus’ resignation.

Perhaps it is then a happy coincidence that the ebook I wrote with Brandon Webb about Benghazi is coming out on the same day as Brennan’s classified hearing.  The ebook will begin to peel back a few of the layers of secrecy that have thus far protected John Brennan and some very shady activities undertaken by the National Security Council.

The book includes many never before revealed details about the Libyan Civil War and the post-war reconsolidation efforts undertaken by Private Military Companies, the CIA, and Ambassador Chris Stevens.  This sets the stage for the situation that led to the attack on the US Consulate (technically a Temporary Mission Facility) in Benghazi.  We then tell it like it actually happened that night and detail the heroic actions of Ty Woods and his fellow OGA operators.  We will also shatter some myths and misconceptions about denied air support and the resignation of General Petraeus.

Perhaps most damning is the question of why.  Why did the attack happen?  What got AQIM elements operating under the Ansar Al-Sharia banner so angry that they decided to over run the Consulate?  Perhaps events in Egypt and a silly Youtube video helped some of the Sheiks mobilize a large group of extremists but there is more to this situation.  Much more.  Ambassador Stevens and David Petraeus never could have seen what was coming.  They were left in the lurch due to covert operations initiated by the White House, a secret war in North Africa being orchestrated by John Brennan.

1 Response to Benghazi: The Definitive Report