NASA: Sleeping With Our Enemies

NASA – Subjugated, “Repurposed” and Sleeping With Our Enemies 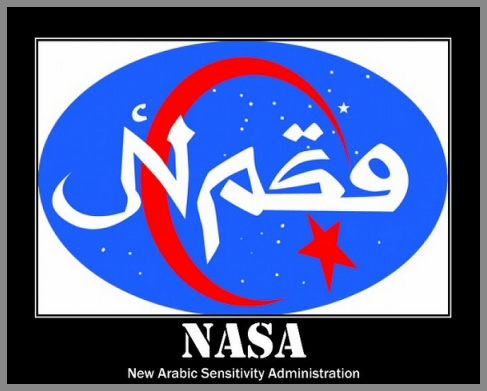 When Obama came into power over four years ago, I knew it was the opening volley of the destruction of much of what America holds dear. One of the first things he did was attack amesNASA. People may have forgotten the layoffs and changes in NASA. I haven’t. Obama has overseen the Islamization of NASA with instructions to run a Mohammedan outreach program. He cut the Constellation program, intended to develop new rockets to carry people into space and the space shuttle program was mothballed — with a special dissing of Texas because they bucked Obama’s EPA mandates. Stellar thuggery gone mad – space exploration, the Chicago way.

Now, it is coming to light that NASA supposedly leaked classified military technology to China, Saudi Arabia and South Korea. If it was leaked, I would wager it was leaked to other countries as well, such as Russia and Iran. We owe tremendous amounts of money to China, who is — make no mistake of it — our enemy. They are currently being accused of massive cyber-attacks against the US, which is an act of war. Let’s not forget that the majority of the bombers on 9-11 came from Saudi Arabia, who condones terrorism and sharia law and they got free goodies as well. Even leaking this technology to South Korea is just plain insane as it lays our military and technological throats bare for our enemies to rip out. If these charges are true, say it with me, this is treason. Have you noticed under Obama, that every enemy we have has become a special friend of Obama and his minions? That’s not an accident, it is by design. It is part of bringing America to her knees.

This has evidently been going on for four years and the FBI has now been stonewalled on the investigation. Now, given, the FBI is not the most competent bunch of investigators these days – they seem to be more into sexting and dating drug dealers, but still…

Two prominent Congressmen have come forward with these accusations of wilfully leaking military/space technology to our enemies. Fox News has obtained documents from a whistle-blower who gave this information to the Congressmen. A Grand Jury was convened to look into this in February of this year, but it has since been put on hold. There are several informants, including a senior NASA engineer. Suddenly, the general prosecutor was removed from the case and it was transferred to another office in California where it now sits in purgatory.

When I mentioned the tech that was compromised to the Armed Services Committee, their jaws just dropped. – Congressional Source

Have you heard about this in the news? I haven’t. I only heard about it by going to Drudge and from several readers who sent it to me. Guess the media is more interested in shiny things and Obama’s propaganda than real news.

The claims originate with several past and current NASA employees concerned with the systemic leak of highly sensitive information relating to missile defense systems, as well as what they call a troubled investigation into the leak.

The documents claim the FBI has been working with other agencies since 2009 on an investigation into foreign nationals working at Ames. This follows allegations by two Republican lawmakers earlier this month that the U.S. attorney’s office in the Northern California district was ultimately denied by the Justice Department when it tried to proceed with indictments.

Of course the government (the DOJ) and the US Attorney’s Office are denying that any of this is true. Just for the record, I absolutely believe it is true. Two members of Congress, Reps. Frank Wolf, R-VA and Lamar Smith, R-TX, in a statement to Fox News said Haag’s denial “conflicts with information we have received from federal law enforcement sources,” and added “we hope that the DOJ Inspector General will take our request seriously.” They sent a letter to the DOJ who acknowledged receipt and said they are ‘reviewing’ the letter. I bet.

The Ames Research Center, which is at the heart of this scandal, is located in Silicon Valley. The accusations come from a violation of the International Traffic in Arms Regulation. This law governs the export of defense weaponry. The information leaked had to do with specialized rocket engines — originally developed for the Pentagon missile defense “Kinetic Kill Vehicle” program, information on guidance and terrain-mapping systems from the Tomahawk cruise missile and a radar from the F-35 were also shared. That ought to make you pause. Hell, it should send a very cold shiver up your spine. Those accused are Ames Center Director Simon P. “Pete” Worden and Will Marshall, a British citizen. I wonder if they were ordered to do it… or did they have a price? I hear 30 pieces of silver goes a long way these days.

According to documents, foreign nationals were brought into the program with little or no vetting. These individuals then shared information with the Chinese and others through the International Space University. But, it gets even better… DHS seized Marshall’s NASA laptop at the San Francisco airport, citing that it contained ‘sensitive’ information. Note to Marshall – you suck as a spy. Obviously, DHS was not briefed on the deal. Three foreign nationals left the US and shared technology all over the place. And I bet it’s still occurring.

On Feb. 8, Reps. Wolf and Smith sent letters to the Justice Department inspector general and the director of the FBI regarding the allegedly illegal movement of this crucial technology. Wolf chairs the House Appropriations Commerce, Justice, Science and Related Agencies subcommittee. Smith heads the House Science, Space and Technology Committee.

The letters allege the FBI had uncovered the ITAR violations, and the U.S. attorney was prepared to issue indictments. But it says the case has been stalled for more than a year, agents in the case were reassigned, and the statute of limitations on the violations is already beginning to expire.

“It is our understanding that this illegal technology transfer may have involved classified Defense Department weapons system technology to foreign countries, including China, potentially with the tacit or direct approval of the center’s leadership,” the letters read.

Sen. Charles Grassley, R-Iowa, also wrote to NASA as early as April 2012 asking about allegations that Worden “allowed foreign nationals” to access Ames – along with “NASA secrets and cutting edge technology” in violation of ITAR.

Of course the media is spinning those who are speaking out about this as ‘China haters.’ I kid you not.

The Washington Times sums it up:

“It is our understanding that after the reassignment, certain defendants and certain charges were dropped from the case without explanation,” the congressmen’s letters say.

The congressmen are asking the Justice Department’s inspector general to investigate whether “political pressure may be a factor.” They also say one suspect’s computer hard drive was corrupted by officials handling evidence.

Political pressure… imagine that… more corruption in the Obama administration. Sounds like they are covering up treason to me. Selling America out to our enemies. Obama has succeeded in destroying NASA from within and he’s actively sleeping with every enemy we have.

Terresa Monroe-Hamilton is a Libertarian and she blogs at NoisyRoom.net. NoisyRoom is a Conservative blog that focuses on political and national issues of interest to the American public.

1 Response to NASA: Sleeping With Our Enemies