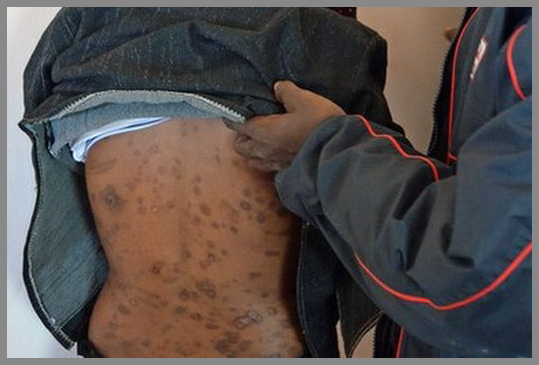 Lamlam, 17, is one of thousands of people who make the treacherous journey from Eritrea to Egypt each year. Many fall victim to unscrupulous people traffickers, who kidnap them and demand ransom money from their families.

“The kidnappers would make me lie on my back and then they would get me to ring my family to ask them to pay the ransom they wanted,” she says, lifting up the back of her shirt to expose a rash of deep scars.

“As soon as one of my parents answered the phone, the men would melt flaming plastic over my back and inner thighs and I would scream and scream in pain.

“This, they hoped, would put extra pressure on my mother and father to find the money.”

A man standing next to her gently places a hand on her shoulder as she finishes speaking.

Zere, his faced swathed in a red and white scarf, was one of those kept with her in a windowless basement room for almost a year.

“They had about four of five of us tied up together and they would pour water on the floor and then electrocute the water so that all of us would get electrocuted at the same time,” he says.

Zere says that nine out of the 20 people held hostage with him died. But, he tells me, by that point those still alive would have welcomed that fate.

“All of us were actually hoping for death because that would have been an escape from the torture.”

Listen to the interview here