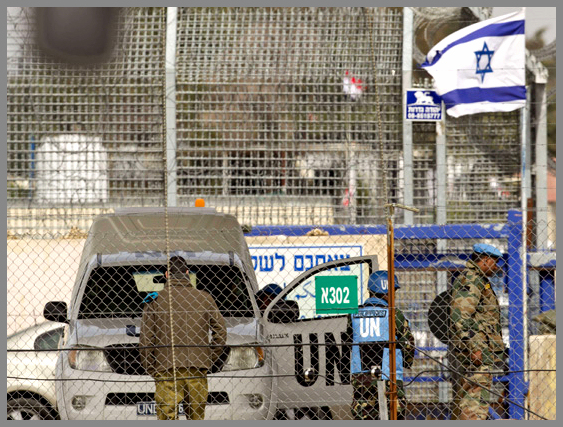 The soldiers, who belong to a UN force, were ordered by their commander to abandon the post for fear rebels may attempt to capture more peacekeepers.

Peacekeepers ordered by their commander to leave post in Syria for fear of additional kidnappings; IDF soldiers meet them at border crossing
Yoav Zitun

Two days after 21 Filipino UN peacekeepers were kidnapped by Syrian rebels in the village of Jamlah, situated less than a mile from the Israeli-controlled Golan Heights, eight other UN monitors from the Philippines abandoned their position on Friday and crossed the border into Israel.

The soldiers, who belong to a UN force that has patrolled a ceasefire line between Israel and Syria for nearly four decades, were ordered by their commander to abandon the post for fear rebels may attempt to capture more peacekeepers.

The IDF was expected to transport the peacekeepers to the UN’s Ein Zivanit base, located near the Quneitra Crossing.

Some two weeks ago Croatia announced that it is withdrawing its 100 troops from the buffer zone separating Israel and Syria. The Croatian government said it feared for the soldiers’ safety after reports that Saudi Arabia had bought arms from Croatia and then provided them to the Syrian rebels.

Meanwhile, the Philippine government said the Syrian rebels failed to release the 21 Filipino UN peacekeepers who were kidnapped on Wednesday and stuck to their demands for repositioning of Syrian government forces before any handover.

The spokesman for the Philippine Department of Foreign Affairs, Raul Hernandez, said the rebels had been expected to free the peacekeepers early Friday.

“I don’t know exactly know what happened, why the expected release did not happen, but the demand is still there” for the Syrian forces to pull back, he told reporters in Manila.

He said that the Philippine government continues to “work with all stakeholders for the expeditious release of our Filipino UN peacekeepers.”

The rebels demand that Syrian troops pull back from the area around Jamlah, the village near the Golan Heights, which Israel captured from Syria in the 1967 Mideast war. UN peacekeepers have been monitoring the armistice line since 1974.