Christmas in The Middle East 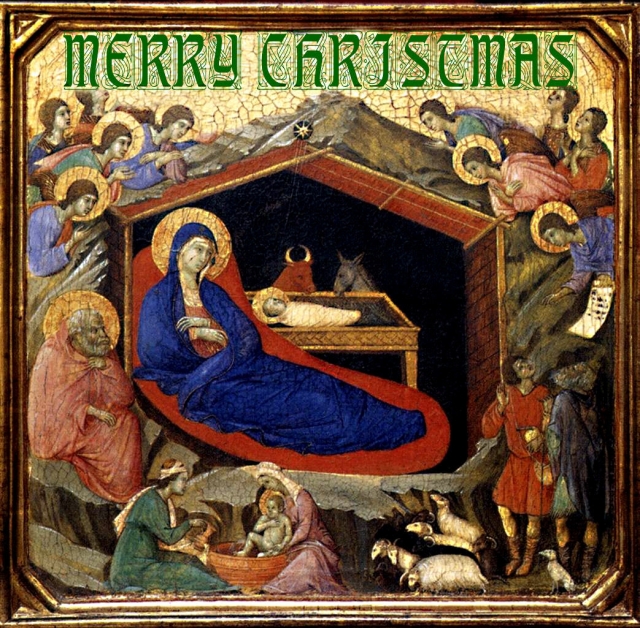 “The pogroms against the Iraqi Jews in Baghdad are still fresh in the memories of people. Today, Iraq is devoid of Jews. Hopefully, the Christians will not face a similar and tragic ending.”

In Iraq, Traditions of Christmas Found Only in Memory 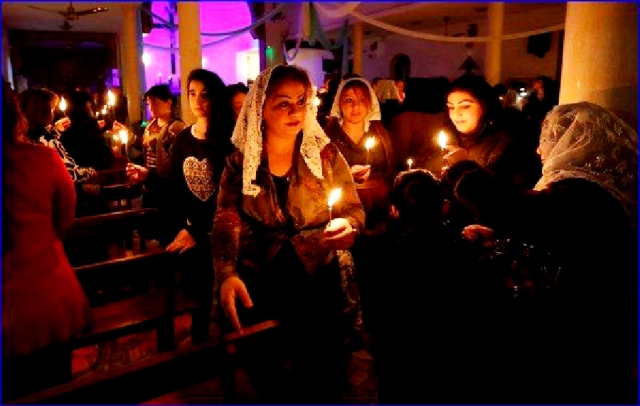 BAGHDAD — No, Miriam, Santa Claus did not forget you this year.

In these circumstances, though, and being far from home, it is a reasonable question for a 5-year-old to ask.

“Yes, he will come, he will never forget you,” Miriam’s mother, Hamama, told her.

For months now, since militants of the Islamic State stormed her hometown, Qaraqosh, in northern Iraq, near Mosul, and began killing and driving out Christians, home for Miriam and dozens of her old neighbors has been the run-down Al Makasid Primary School in Baghdad. To get by, they have relied on the kindnesses of the nearby church, and of local Muslims, too.

In the school’s dingy courtyard there is a tree, trimmed in balls and bells, and a Nativity scene. A few gifts have been donated — toys, clothes, dolls and candies. It is not much, and nothing like being at home, but Christmas has not been the same in Iraq for a long time now.

Two numbers tell that story. In 2003, when the Americans invaded, there were an estimated 1.5 million Christians living in Iraq. Today, experts say, there are fewer than 400,000, many of them on the run from the Islamic State. 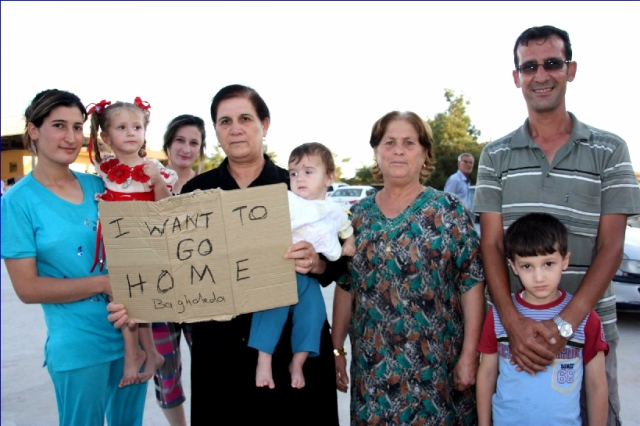 Here at the school, the children are making the best of it. On a recent afternoon, they were running around near the tree — laughing, as Miriam was, in her pale red jogging suit, and playing hide-and-seek.

It is the parents who can hardly take it. 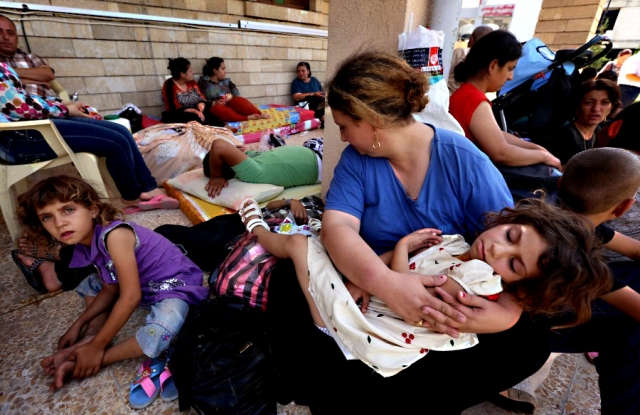 Save the Christians of The Middle East

The children “don’t really understand what is happening in their villages,” said Sabrina Yousef, one of the mothers.

For the parents, added to their grief is the burden of memories of what Christmases used to be like.

“The neighbors, the kisses, the happiness,” said Samir Bihnam, 46, when asked what Christmas meant to him.

Mr. Bihnam grew up in Baghdad. He fled four years ago to the north after a horrific attack on a local church left dozens of Christians dead, only to find himself back, living in this school, escaping another round of terror.

“It was all first-class food, and clothes,” he said, recalling the holidays of his youth. “The church was beautiful and it was full of happiness. Now it is full of sadness.”

“You can’t see the friends you used to know,” he added. “They are either dead or have left the country.” 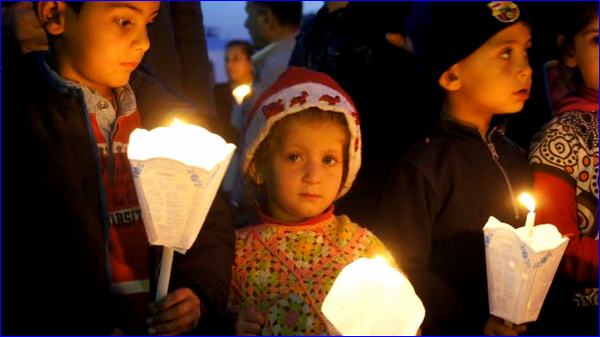 Baghdad Christmases were once magical affairs, shared by Christians and Muslims. The streets were lit up, the municipality sponsored fireworks, and the last week of the year — from Christmas right through New Year’s — was one long party. At every table, it seemed, was the traditional dish of boiled sheep’s head, and in every oven, the date-filled cookies called klecha.

Writing in the 1920s, the British historian Richard Coke, in his book, “Baghdad: The City of Peace,” described it this way: “The magnificent scale on which the Christian festivals were celebrated in the churches led to many Muslims attending the services, and it was, we are told, a popular custom at holiday times to repair to one of the country monasteries with which the neighborhood abounded, ‘for dancing, drinking and pleasure-making.'”

Nowadays, it is hard to find even a natural Christmas tree. At a tree nursery, small potted spruces flown in from the Netherlands are on sale, at $50 a pop. But Muhammad Isam, the shop’s owner, said he had sold only two of them, both to a local church. Years ago, he used to sell dozens of big trees — he spread his arms wide for emphasis — to families at Christmastime.

Even the Christmas wish lists of young boys reflect the country’s tragic trajectory, said Mahal Mikhael, a Baghdad housewife. Before, she said, boys asked for train sets or a soccer ball or a toy car. Today, she said, they ask for toy guns.

For the Christians, times were undeniably better under Saddam Hussein, who, they say, at least kept them safe from sectarian violence. It is the same reason that many Christians, and other religious minorities, in Syria tolerate the police state of Bashar al-Assad.

“There were problems, but at least we felt protected,” said Mr. Bihnam, who served in the Iraqi Army during Hussein’s time.

“No one dared say, you are a Christian or a Sunni or a Yazidi or a Mandean,” he said. “We were only Iraqi soldiers.” 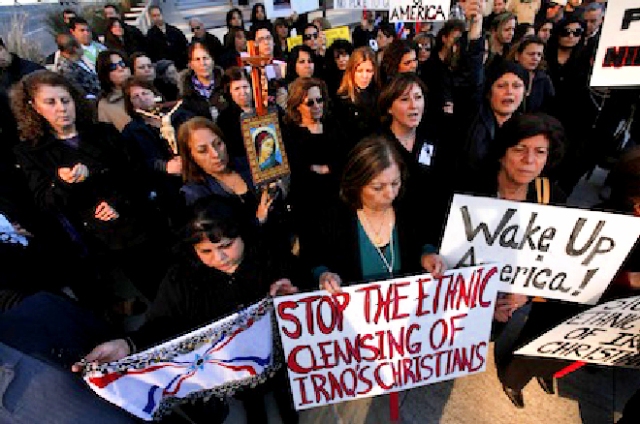 Many Christians say suffering brings them closer to their religion. But in these times even solace in faith has its limits.

Christianity teaches that things of this world have a start and finish; as the verses go in Ecclesiastes, “a time to be born and a time to die.”

“We believe everything in the world has a beginning and an end,” Mr. Bihnam said. “But not in Iraq. There is no end.”

There will be Christmas Mass in the courtyard of the school for families who feel embarrassed to go to church dressed in the clothes they own. Typically, Christmas has been a dress-up affair here.

Twice now, a good-hearted man dressed as Santa Claus — “Baba Noel” to Iraqi children — has delivered gifts to the school, and the children were awaiting one more visit, on Christmas Eve.

“We are expecting him to come at night,” one little girl said. “I want beautiful outfits and nice shoes.”

Nour Faleh, a 12-year-old boy, said he wanted a “remote-controlled jet fighter.” A kindergartner named Theresa said she wanted a nice blouse but, most of all, she said, “I want to go back to my home.”

Miriam said she wanted a doll and a new dress.

A sign posted near the tree in the school courtyard expressed the Christmas wish they all share:

“Fill Iraqis’ hearts with love and peace, and deliver my country from this situation, and make Iraq a country where everyone feels that he is accepted and loved, so that the entire people will feel that they are one family.”

The Persecution of Iraqi Christians Didn’t Begin in 2014

Crucifixions are Not A Hoax

Sieges against Christians in Lands “Liberated” by the American Military

Obama’s America & The Genocide of Christians

1 Response to Christmas in The Middle East