Obama: “Either You Are With The Terrorists or You Are Against Us”?

“Every nation, in every region, now has a decision to make. Either you are with us, or you are with the terrorists.  (Applause.)  From this day forward, any nation that continues to harbour or support terrorism will be regarded by the United States as a hostile regime.”   President G.W.Bush Sept- 20, 2001

How times have changed!  Today’s Post-American mantra has morphed into “Our Al Qaeda and Islamic State allies deserve our full support. Anyone who does not support “our terrorists” will be viewed as a “Commie” or worse”.

Virtually all U.S. politicians, media news-readers and constipated pundits have adopted the Obama administration’s revisionist agenda that seeks to paint the CIA trained terrorists as Jeffersonian “freedom fighters”.  Even previously sensible commentators are now focussing on Russia’s involvement in the conflict, knowing full well that Russia has had a base  in Tartus Syria since 1971 and are the only “super-power” willing to use their military to fight back against the U.S./CIA backed Al Qaeda and ISIS forces that are responsible for over 200,000 deaths in Syria.

Inevitably, Obama and his sock-puppets have as a last resort, tried to claim that their pro-Al Qaeda & ISIS policies are aimed at “Protecting Israel”. The destruction of  Israel of course is the next target of Obama and the next President.

The elimination of Christian, secular and non-Wahhabi Muslims from the Middle East has been the goal of every U.S. administration since Roosevelt met King Saud at Bitter Lake.

To the Americans and their Saudi masters, the most annoying secular and non-Wahhabi state in the Middle-East is of course, the State of Israel. The elimination of the Jewish State has forever been America’s “Final solution to the Arab-Israeli problem”.

As for the Russian threat to Israel, let me remind you that Israel is supporting Russian efforts in Syria with SIGINT and “boots on the ground” intelligence. Israeli special forces have guided Putin’s aircraft to their (CIA backed) terrorist targets. Israel also provides advanced satellite imaging to U.S. forces, which they hand over to their coalition “allies” but otherwise ignore.

Let’s get this straight once and for all.

The United States is illegally arming and training forces of Al Qaeda and ISIS.

Journalists and pundits who are against Russian efforts to defend the Christians and secular citizens of Syria are in fact supporting terrorism and in the end, supporting those whose ultimate goal is the destruction of the Israeli State. That includes the Obama administration and their Republican Guards along with the E.U. and their Saudi Masters. 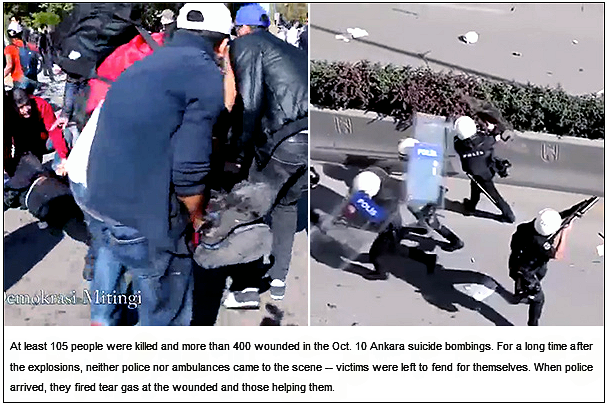 On October 10, the Kurds in Turkey were exposed to yet another massacre – this time a double suicide bombing in Ankara, the capital of Turkey, in the center of town.

This time, two explosions ripped through a peaceful crowd that had gathered outside the entrance to Ankara’s central railway station to proclaim an end to violence in a “Labor, Peace and Democracy” rally.

Together with the Kurds were officials from the pro-Kurdish Peoples’ Democratic Party (HDP); supporters of left-wing parties, and members of trade unions in Turkey — all calling for peace and democracy.[1]

At least 105 people were killed, according to the Turkish Medical Association, and more than 400 injured.[2]

One victim, Meryem Bulut, was a 70-year-old member of the “Saturday Mothers” group, who have protested about their missing sons and daughters since the 1990s. Her grandchild died last year fighting against ISIS in the Yazidi town of Sinjar, Iraq.

Nine-year old Veysel Atilgan participated in the rally with his father, Ibrahim Atilgan; both were killed in the blasts.

The aftermath of the explosion was almost as horrific. The police delayed medical help, and instead attacked with tear gas and pepper spray the people that were helping the wounded, in an effort to disperse them. The government, after attacking even the wounded, unleashed the military and police apparatus against Kurds who came to mourn their dead.

Orhan Antepli, the legal secretary of the Bursa branch of the Trade Union of Public Employees in Health and Social Services (SES), witnessed the explosion. The police used tear gas against the wounded, he said, and did not allow ambulances to enter the area:

“On the road, for two kilometers, we did not see a single police officer. I was facing where the second explosion took place. After it, there were about 100 pieces of flesh of 1cm each on the coat of the person beside me.”

Antepli said that he ran to help the wounded, but the police did not allow ambulances to enter the area: “While I was treating a wounded man, the police started using tear gas. They blocked the road. Two or three gas bombs were thrown at the people.”

“An utterly successful operation against terror was carried out. Similarly, due to our vigorous efforts since 23 July, the most important cadres of ISIS have been arrested or their contacts have been broken. … But when you step out of routine, this has a limit in a democratic state of law. You cannot arrest someone without a reason. There is even a list of people who might engage in suicide bombing in Turkey. You follow them, but when you do something before they carry out that act, you are exposed to another protest.”

So, Turkey keeps a list of potential suicide bombers, while Davutoglu is saying with a straight face that the government — which has attacked and even arrested many journalists simply for doing their job, and even high-school students for tweets critical of the government — should not arrest a potential suicide bomber “without a reason.” The AKP is the last government that should be talking about a “democratic state of law.”

Just after the blasts, some Turkish authorities said that the Islamic State (ISIS) had caused them. Yet in response, Turkish jets did not bomb ISIS; they bombed the Kurdish PKK, who are fighting ISIS. After the government rejected a new ceasefire announced by the PKK on Saturday, the Turkish air force attacked.

The PKK had declared in a written statement that “they reached the decision to stop military action against Turkish state forces as long as there were no attacks.”

The Turkish government, however, seems determined to continue killing Kurds no matter what. “The PKK ceasefire means nothing for us,” one senior Turkish security official told Reuters. “The operations will continue without a break.”

While the Turkish army is bombing the PKK headquarters (again), the Ankara Chief Public Prosecutor’s Office has issued a gag order on the Ankara massacre investigation.

In addition, the state media watchdog, the Turkish Radio and Television Supreme Council (RTUK), imposed a ban on broadcasting images of the bombings. After the temporary ban, Twitter, Facebook, and several other social media sites were also inaccessible throughout Turkey. That is what a repressive state does to keep facts from coming out.

Later, when many people in Ankara, including Kurdish MPs and mayors, took to the streets to protest the massacre, police used water cannons and tear gas against them. Some protesters were wounded and taken to hospital; four were arrested.

Across Turkish Kurdistan, countless protesters were also exposed to police violence. The police in Diyarbakir used real bullets with the tear gas. An ambulance was reportedly prevented from entering the area where Ahmet Taruk, 63, was overcome by the tear gas; he lost his life on the way to the hospital. During a police crackdown in Izmir, 66 people were arrested.

Eventually, the Turkish media reported that both perpetrators of the Ankara suicide bombing attack had indeed been identified as members of ISIS. One of them, Omer Deniz Dundar, had gone to Syria in 2013 and came back to Turkey in 2014. Eight months later, he went back to Syria again. His father said in an interview that he had sought the help of the police many times to bring his son back home, but could do nothing.

The other suspect, Yunus Emre Alagoz, in his latest telephone conversation in May 2015, said, “This is the last time we are speaking.” The call was recorded by the police. They interrogated Alagoz as a “suspect” but then released him.

His brother, Yusuf Alagoz, said that Yunus Emre Alagoz had attended school in Afghanistan in 2009, followed by a religious education at a madrassah [Muslim theological school] in Iran.

Still another brother, Seyh Abdurrahman Alagoz, had carried out the deadly suicide bomb attack in Suruc on July 20, in which 33 people were killed.

But just imagine for a moment that it really was two terrorists who committed the massacre, without the knowledge of the Turkish government, and that the state institutions were completely innocent. Where, then, were the security forces to help people after the blast? Where were the medics to help with the wounded? Where were the ambulances? Where were the special forces and the police, so quick to shoot Kurds but not protect them?

The pro-government media in Turkey has been claiming that the PKK was the perpetrator and that the HDP party should be held responsible. They only criticize the public’s response to the attacks; never the attacks themselves.

In Turkey, at other gatherings, not even a mosquito can fly without the Turkish police interrupting it. Yet for this demonstration, there was no security; no medical personnel, no protection for the demonstrators. After the blasts, people were covering the dead with the banners they brought to the rally. People were trying to resuscitate the wounded and making splints for their broken bones by themselves.

Who knows how many people would have survived had it not been for the tear gas that prevented them from breathing? So severe were the wounds that people could not even leave the area; and police were firing tear gas.

After the massacre, Selahattin Demirtas, the co-chairman of the HDP party, said:

“They are trying to convey the message that ‘we can come and rip you to pieces in the middle of Ankara’. They are on the brink of saying ‘the HDP blew up its own rally.’ The prime minister spoke for half an hour; he spent 20 minutes insulting and threatening us. Did you hear him make a single statement condemning ISIS? No. He is still threatening us. Ankara is the capital of Turkey. If a bird flies here, the state knows about it. This is the city where the intelligence unit is the strongest. There was a rally of 100,000 people but no security precautions were taken. Look at their own rallies: the security precautions start 10 streets away. There were 100 corpses; 500 wounded. But they had also had to deal with the water cannons fired by police. Is that what your justice is?”

During the rule of the AKP government, similar massacres against Kurds in Roboski, Diyarbakir and Suruc have also taken place. Before that, since 1920s, there were many massacres against Kurds. None of the perpetrators has ever been punished: in those massacres, the planners and organizers were state authorities themselves.

On October 10, the Kurds and their friends tried to call for an end to war. The Kurds proclaimed peace and brotherhood — Turkey as usual, responded with murder.

Uzay Bulut, is a Turkish journalist, born and raised a Muslim, and based in Ankara.

[1] The rally was organized by the Confederation of Progressive Trade Unions of Turkey (DISK), the Union of Chambers of Turkish Engineers and Architects (TMMOB), the Turkish Medical Association (TTB) and the Confederation of Public Workers’ Unions (KESK). The Peoples’ Democratic Party (HDP) was one of the major participants.

[2] The Peoples’ Democratic Party (HDP) said in a written statement that the Ministry of Health does not share the data at hand about the dead and wounded and the chief physicians of hospitals have been given certain instructions not to share the data with the public.

3 Responses to Obama: “Either You Are With The Terrorists or You Are Against Us”?